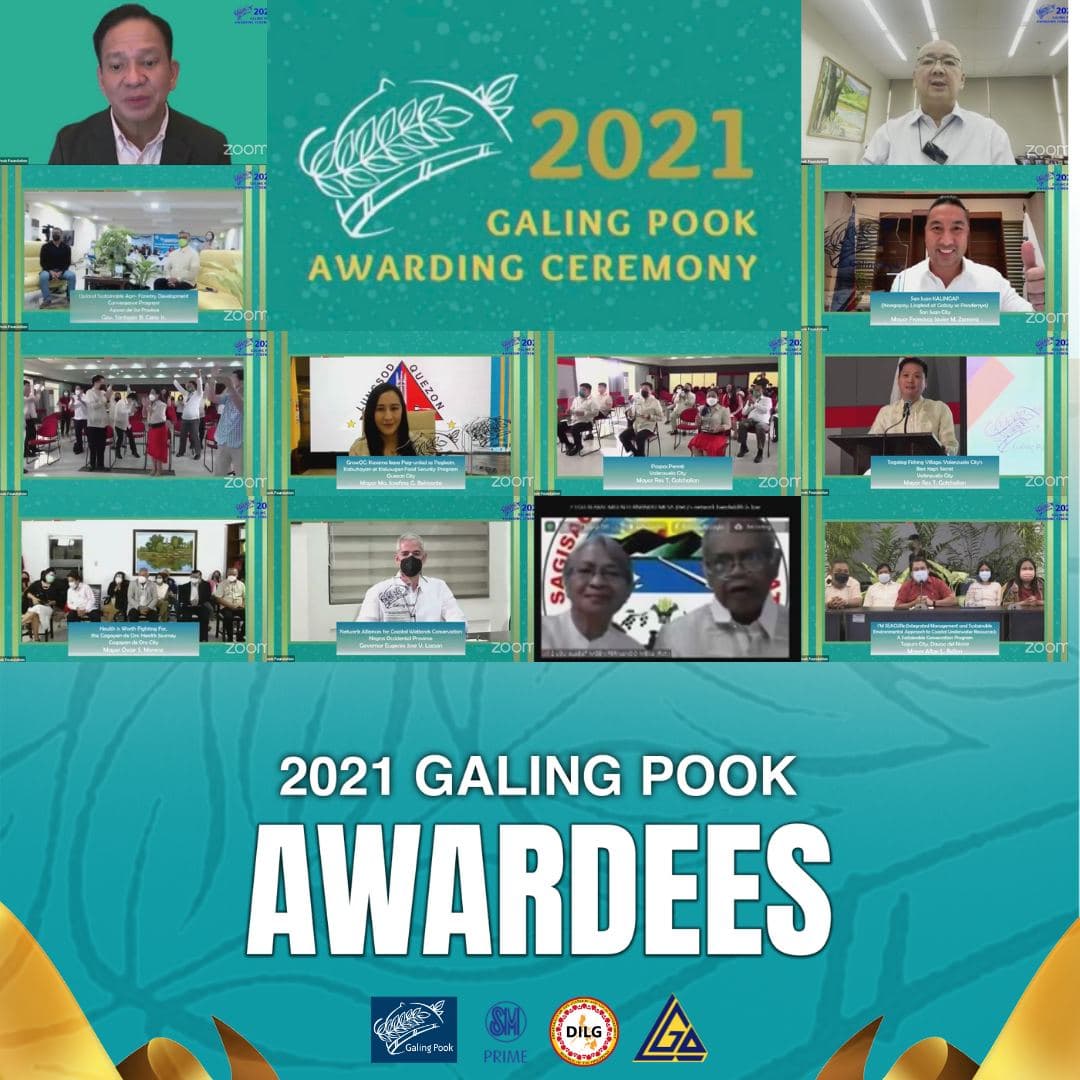 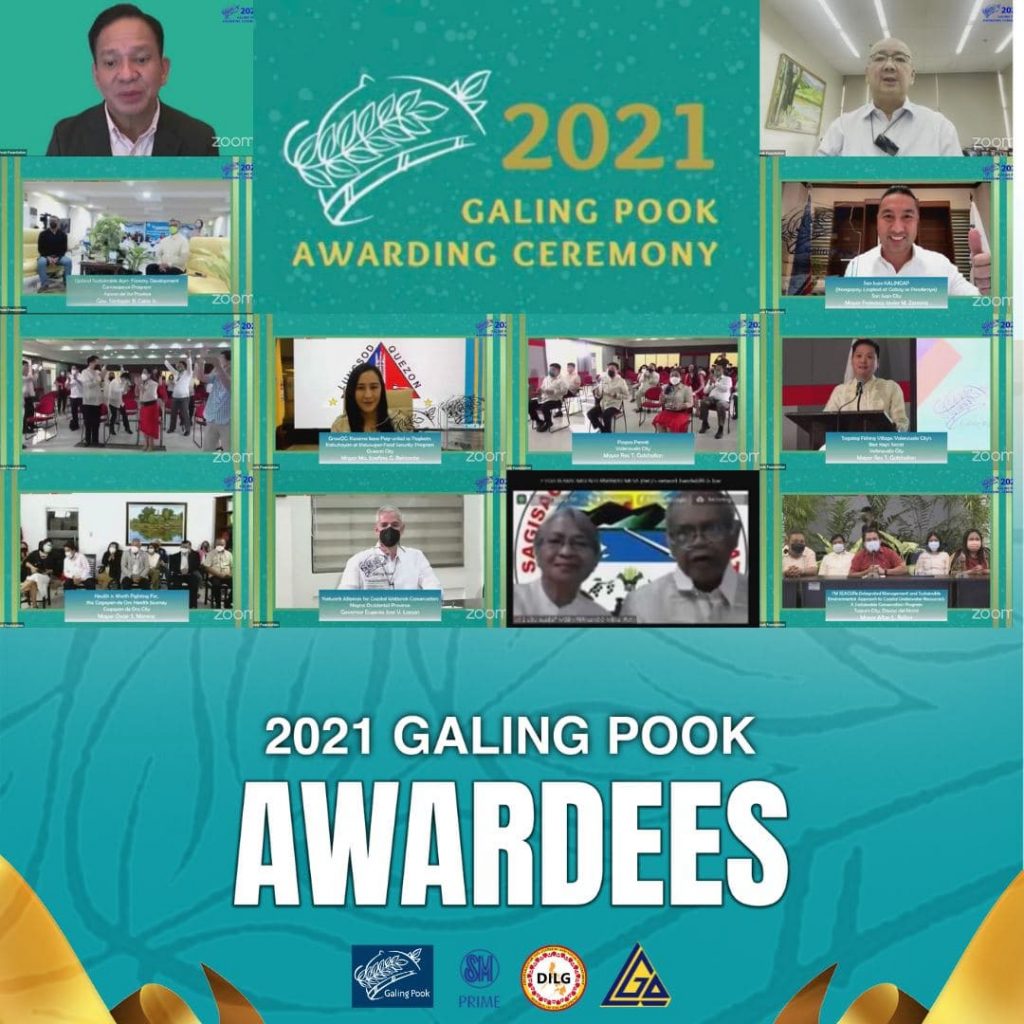 Ten outstanding local governance programs from different cities, municipalities, and provinces across the country were recognized in the 2021 Galing Pook Awards.

Galing Pook Chairman and former DILG Secretary Mel Sarmiento said there is so much cause to honor and celebrate the best models of excellence in this year’s awards as they have delivered the most outstanding innovations even in the most challenging times. These LGUs came up with programs to address gaps in health, education, economy, the environment and disaster resilience.

“These programs demonstrated the desire of our people for effective and excellent leadership from our local governments especially during the time of the Covid-19 pandemic…The real work happens after today. The challenge is to scale up these efforts so that more Filipinos would benefit,” Sarmiento said.

SM Prime Holdings, Inc. (SM Prime) through the initiative of ARISE-Philippines, where SM Prime is the lead member, partnered with the Galing Pook Foundation (GPF) and the Department of the Interior and Local Government (DILG)-Local Government Academy (LGA) in support of the Galing Pook Awards, as part of the company’s contribution to promoting and achieving a more sustainable and disaster-resilient Philippines.

SM Prime will provide financial and other forms of support in recognition of provincial, city and municipal governments’ exemplary governance, innovation, sustainability, disaster risk reduction and resilience initiatives that have made lasting positive impact on the community.

As one of the country’s leading advocates from the private sector, SM Prime promotes and espouses disaster risk reduction and resilience for its businesses, communities and employees. This includes its membership to ARISE Philippines, a network of companies and private sector institutions, with voluntary commitments to the implementation of initiatives in support of the 2015 Sendai Framework for Disaster Risk Reduction (SFDRR) which aims to achieve the substantial reduction of disaster risk and losses in lives, livelihoods and health and in the economic, physical, social, cultural and environmental assets of persons, businesses, communities and countries.

“I am confident that the outstanding LGU programs that are recognized by this Awards will undoubtedly make their respective communities more resilient and sustainable as well as generate awareness and inspiration to other local governments and communities to level-up their respective governance and other practices to be more efficient and effective,” said SM Prime President Jeffrey C. Lim.

Hall of famer, Valenzuela City, bagged the most number of awards this year with their three programs: Valenzuela Live: The Valenzuela City Streaming School, Paspas Permit, and the Tagalag Fishing Village.

Valenzuela Live addressed the learning gap among students through virtual simulations of face-to-face classes with locally-produced learning modules. Lessons are regularly streamed and uploaded online while parents are trained to be the first teachers at home.

Paspas Permit took the ease-of-doing-business to a different level through its digital application process. It is also the country’s first and only end-to-end platform for acquiring permits that shortened the waiting time to less than 10 minutes.

Meanwhile, Tagalag Fishing Village is a transformation project that re-awakened travel and tourism in the industrial city of Valenzuela. From being an almost forgotten piece of history, Tagalag is now the most accessible, eco-friendly and pandemic suited tourism destination in the metropolis!

Cagayan de Oro City proved that health is worth fighting for. Through the expansion of its Local Health Board, low-income families were subsidized in PhilHealth, hospitals were transformed and modernized, and constituents were given access to healthcare services and medical facilities.

The province of Negros Occidental’s entry focused on the rehabilitation and protection of their marine resources. A strong network of alliances with coastal cities, municipalities and barangays ensured environmental protection while communities were given access to their natural resources.

Who would’ve thought that there can be hectares of fresh food sources in the city? The GrowQC program is Quezon City’s food security and self-sustainability strategy that converted idle lands into abundant food sources. It also gave displaced workers alternative sources of income, and community access to healthy and nutritious food.

Tagum City’s IM SEACURE program is a coastal rehabilitation story that changed the attitude and behavior of stakeholders as they pledge to end the man-made devastation in their marine resources. Today, their seven-year journey paid off and gave them bountiful harvests and improved the quality of life among coastal barangays.

The province of Agusan del Sur’s USAD program was a game changer for Agusanons. Its recovery and rehabilitation strategy led to the conservation of resources and poverty reduction among upland barangays.

The Municipality of Alabat made a bold move in shifting from copra to coconut sugar production. It exponentially increased the income of farmers by seven times more! Today, Alabat is making its name as the home of Coconut Sugar producers in the country.

Last but not the least is San Juan City’s all-inclusive Covid-19 response. One of its highlights is the response to the education sector as it is the first LGU in the country that was able to provide gadgets, internet connection, and a systematic learning module system for all its public-school students.

SM Prime is one of the country’s leading advocates from the private sector, that promotes and espouses disaster risk reduction and resilience for its businesses, communities and employees. This includes its membership to ARISE Philippines, a network of companies and private sector institutions, with voluntary commitments to the implementation of initiatives in support of the 2015 Sendai Framework for Disaster Risk Reduction (SFDRR) which aims to achieve the substantial reduction of disaster risk and losses in lives, livelihoods and health and in the economic, physical, social, cultural and environmental assets of persons, businesses, communities and countries.

The 2021 Galing Pook Awards was held last October 20, 2021 through a virtual awarding ceremony. It was co-presented by SM Prime and the DILG-LGA.