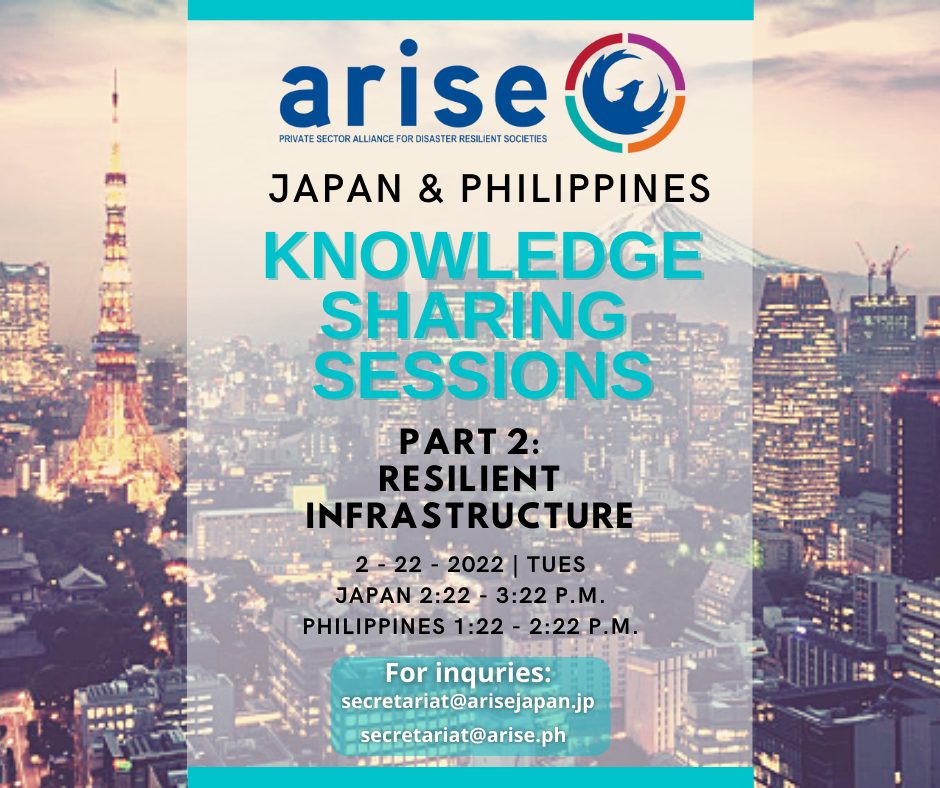 In his opening remarks, Mr. Masato Takamatsu, President of Tourism Resilience Japan and ARISE Japan Lead noted that “it is critically important, in both our hazard-prone countries, to make infrastructure resistant to potential disaster risk, and thus resilient” and encouraged the approximately 30 participants to take advantage of this opportunity to engage in close and direct conversation with ARISE colleagues across Networks.

Dr. Takayuki Mayumi, Disaster Prevention Expert, Manager of Global Operations Department, Japan Conservation Engineers & Co., Ltd. gave the first icebreaker presentation on the latest trends in slope protection and landslide management. “We’ve learned a lot from past disasters in Japan – we realized, for one, that hard infrastructure are not eternal” said Dr. Mayumi. He noted the necessity to systematically monitor and maintain these hard structures, and ensure there is budgetary preparedness to do so.

Mr. Angelo Tan, Country Lead for the Philippines (Climate Business), International Finance Corporation then followed with a presentation introducing the Building Resilience Index (BRI, https://resilienceindex.org/), a new rating system to incentivize investments in climate change adaptation and resilience, piloted in partnership with ARISE Philippines. BRI helps to identify risk and mitigating measures to manage risk, and to disclose risk. The rating is designed as a common language between building owners, developers, financial institutions, governments, as well as occupants. “Ultimately, we want this to help buildings reach an A or A+ rating, and for everyone to make a more informed decision about the resilience of their building,” Mr. Tan said.

In response to participant questions, Mr. Mayumi commented further on the need to acknowledge risk, as a first step in understanding risk, and mitigating it. “Developers need to go in with an expectation that slopes will collapse, and make efforts to understand the existing risk under that lens. Willfully ignoring such a possibility is what leads to disasters,” he said.

Participants agreed that the BRI was a good initiative that can be further disseminated through UNDRR’s Sendai Framework Voluntary Commitment platform (https://sendaicommitments.undrr.org), as suggested by Ms. Yuki Matsuoka, Head, UNDRR Office in Japan, and a wider engagement by ARISE, as noted by Ms. Liza Silerio, ARISE Board. “The private sector cannot just wait for governments to take action. In the BRI we have an instrument to push resilient infrastructure through our own efforts” noted VAdm. Pama, Co-Chair, ARISE-Philippines. “We already have the necessary tools. ‘Building Better Before’ in infrastructure is a matter of applying them,” he said.