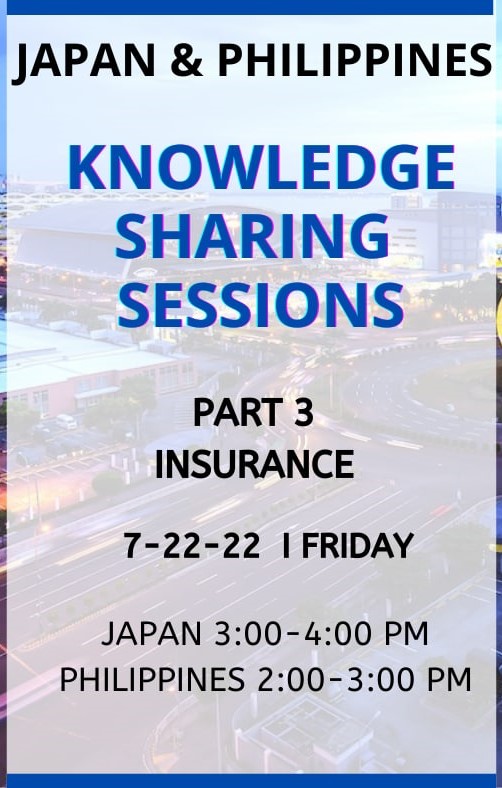 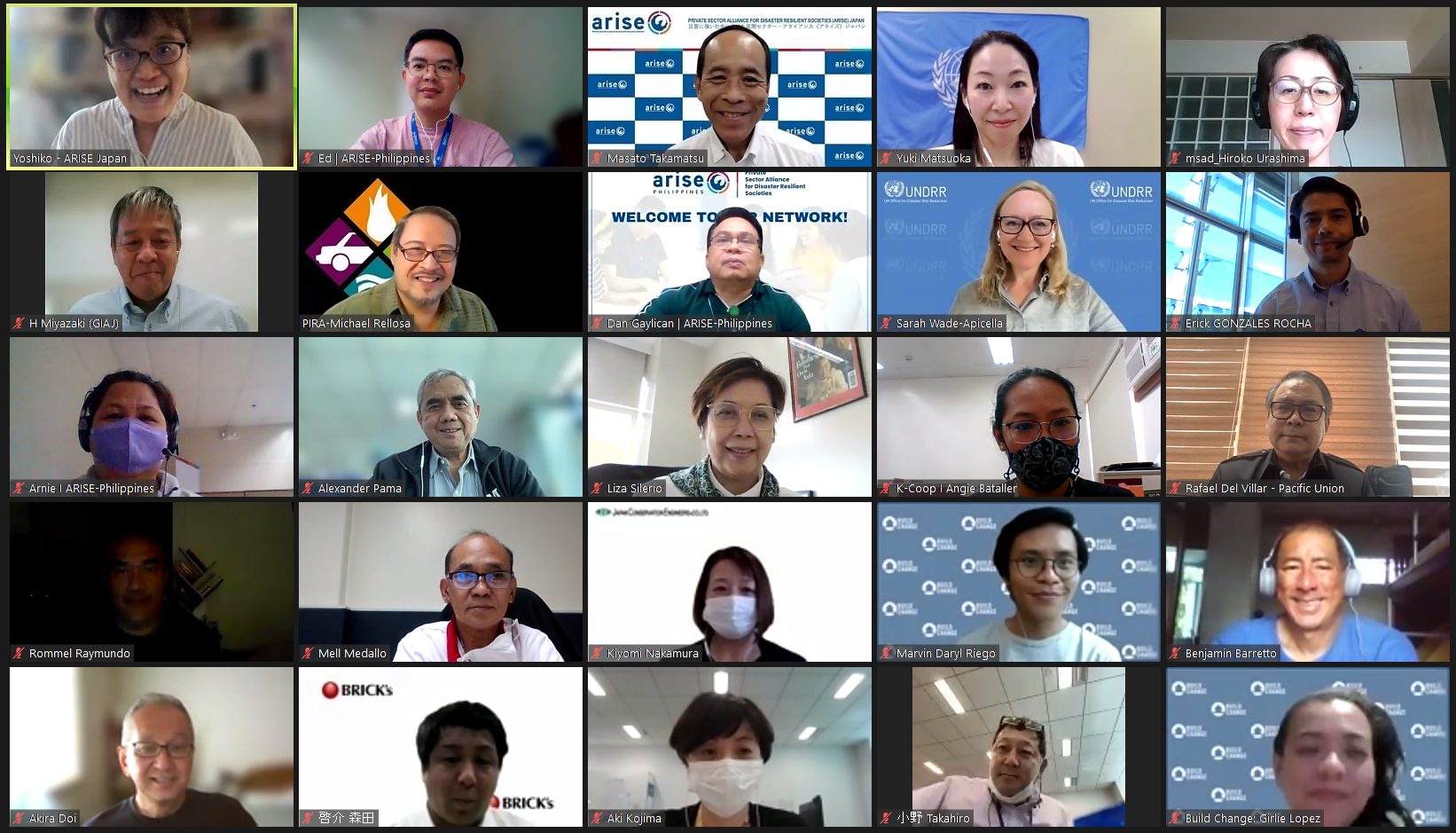 In his opening remarks, Mr. Masato Takamatsu, President of Tourism Resilience Japan and ARISE Japan Lead noted the KSS series will cover the third of the four ARISE Priority Areas, Insurance as Risk Managers, following previous sessions on SMEs and Resilient Infrastructure. He welcomed the more than 30 participants into this opportunity for close and direct conversation with ARISE colleagues across Networks.

In a short scene-setting discussion, Ms. Yuki Matsuoka, Head, UNDRR Office in Japan, reviewed the outcomes of the Global Platform 2022, held in Bali, Indonesia this past May, which included specific mentions of insurance its role as a sector to incentivize risk reduction and prevention, as well as the key themes and events in the upcoming Asia-Pacific Regional Platform (APMCDRR) in September in Brisbane, Australia. She introduced two additional participants from UNDRR, Ms. Sara Wade-Apicella and Mr. Erick Gonzalez from the Partnership Unit in Geneva.

Mr. Michael Rellosa, Philippine Insurers and Reinsurers Association (PIRA) gave the first icebreaker presentation titled “Insurance industry’s response to address DRR issues,” a very informative talk beginning with a broad overview of initiatives undertaken by the insurance industry in the Philippines, and a deeper dive into the Philippines Catastrophic Insurance Facility (PCIF) and a parametric insurance product for MSMEs. “The Philippines sits at the apex of climate and seismic risks, and has for a long tried to address these risks, primarily through micro-insurance products. However there was a realization that this was not the only way to address this gap” said Mr. Rellosa, explaining how PCIF, a systemic, multi-sectoral collaboration between local and global insurance players, regulators, World Bank and GIZ came into existence, which increases the resilience of the local insurance sector. He described how PCIF, expected to be operational later this year, will address the traditional insurance market and traditionally underserved residential and SME businesses through two separate streams, the latter available in small, flexible increments. “The two PCIFs are likened to the outrigger canoe ubiquitous to the Philippines, supporting the canoe, or the country, itself, with a goal to be sustainable and to be able to bounce back after disasters” said Mr. Rellosa.

Mr. Rellosa described the usefulness of parametric products, for the insured who can access immediate cash payouts after a disaster event, as well as for the insurers as they allow for digital and automated payout processes and can be bundled with traditional insurance products, and may be used to insure residences, shops, and even crops. He shared lessons learned, such as having to price-adjust after an initial launch of the parametric product failed to attract enough clients.

Ms. Hiroko Urashima, MS&AD Insurance Group Holdings, Inc. then followed with a presentation on the role of insurance as risk managers. “We have three social missions as an insurance company: prompt and appropriate payment; proper understanding and adequate preparedness, which includes insurance penetration; and contributing to the rapid recovery and subsequent reconstruction through close cooperation with the local community” said Ms. Urashima.

Ms. Urashima illustrated how such corporate missions translate into action through several examples. First she shared examples of brochures that educate citizens on the importance of insurance and was instrumental in narrowing the protection gap.

She shared an online tool for real-time damage prediction, cmap.dev, initially developed to support quick payouts among the insurance industry itself. “Damage prediction is important for insurance companies as we need it for our heavy load of payout procedures, but this information is also important to local governments to prevent secondary disasters, and to give appropriate support to residents” explained Ms. Urashima, as the reason the tool was subsequently made available to the public.

She also shared a smartphone app that guides residents to the nearest shelter in flood conditions by combining maps and street-view photos; the
LaRC-Flood project, a collaboration with academic institutions that visualize IPCC-related research outputs as an interactive global forecast map of increased flood frequency based on climate change impacts, also available for free; and a new, on-going, government-funded research project to produce high-precision global flood hazard maps for present climate as well as maps reflecting climate change. “We try to think about the future of disasters. Extreme weather is just weather, but turns into disasters depending on how we live and how we build our cities, so it is important to know what risks exist in the future and build resilient cities. The role of insurance is no longer just about giving compensation and coverage, but to support recovery and prevent future accidents and disasters. In this sense, investigating the effects of climate change is urgent and it is our role to contribute new science and knowledge to society” said Ms. Urashima.

In the short discussion portion that followed, Mr. Erick Gonzalez, UNDRR, asked what the enabling factors are for insurance projects to be successful. Mr. Rellosa noted that one success factor was to have everyone on the same page, through inclusion in early development stages. Ms. Urashima agreed with need to engage multiple stakeholders, as well as its difficulty, noting that patient follow-up and explanation is often necessary. As an example of collaboration Mr. Rellosa also noted the Hazard Hunter app, a product developed by GeoRisk Philippines, a multi-agency initiative led by the Department of Science and Technology – Philippine Institute of Volcanology and Seismology (DOST-PHIVOLCS) and utilized by PIRA. Ms. Urashima asked about the data behind the Philippines’ parametric products, which needs to be of consistent quality and coverage. Mr. Rellosa noted that in the existing product, the data actually comes from the Japanese Metrological Agency, illustrating that the data does not necessarily have to be locally sourced.

Ms. Liza Silerio, ARISE Board noted in her address that “ten years ago in the Philippines, financing of disasters relied on a reactive approach, which we know is unsustainable. Efforts have been undertaken to promote a more proactive approach, and I’m glad to hear about progress in both countries”. “We continue to work to change the mindset, reaching out to businesses, talking to governments, and we can do it with the private sector pushing it in the forefront” she noted.

VAdm Alexander Pama, Co-Chair, ARISE Philippines appreciated the KSS as a cannot-miss informative event, and welcomed the high turnout of more than 35 participants from the two networks, saying “We would want to expand the sharing of this knowledge, maybe even beyond the membership of ARISE. The information shared this afternoon gave a good introduction of what ARISE Philippines and ARISE Japan are doing, and this KSS is one of the best practices we are doing right now. We will also look into working on common projects that other ARISE networks can emulate.”