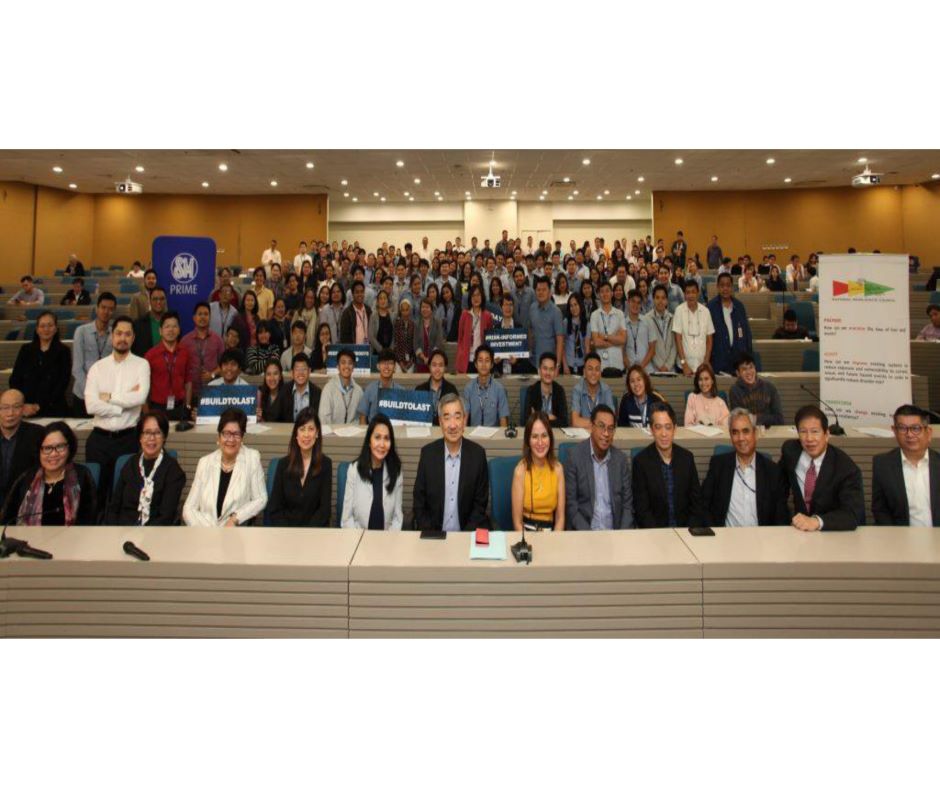 The forum was attended by hundreds of participants from the private sector, academe including college students and government agency personnel.  The Keynote Speech was delivered by Dr. Catalina Cabral, Department of Public Works and Highways Undersecretary for Planning and PPP. USec Cabral announced that under President Duterte Administration continuous efforts to build a resilient Philippines are underway. Aside from road networks other projects under resilience include Rain Water Collection System and Bridges Seismic Improvement.

Dr. Renato U. Solidum, Jr., Undersecretary for Disaster Risk Reduction-Climate Change Adaptation of the Department of Science and Technology (DOST) shared the agency’s innovation, “Hazard Hunter PH”. According to Dr. Solidum, The Hazard Hunter PH produces a hazard Assessment report that summarizes, explains, and recommends the potential hazards seen in a specific area.

The audience also heard from Dr. Elisea Gozun, former secretary of the Department of Environment and Natural Resources (DENR) and former Presidential Assistant on Climate Change who talked about attaining water security by building for resiliency. Engr. Ronaldo Ison the President of the Association of Structural Engineers of the Philippines Inc. (ASEP) talked about resilience and the Philippines’ building code, highlighting Philippine seismicity and the zone maps that can guide developers when building infrastructures.

Meanwhile, former OIC Chief of Bureau of Fire and current consultant of SM Supermalls, Gen. Carlito Romero shared updates about the Revised IRR of the Fire Code of the Philippines which took effect October 17, 2019. SM Engineering Design Development’s Vice President, Arch. Fides Hsu talked on SM Malls Disaster Resilient Designs highlighting the water catch basins of some of the SM Malls. Mr. Raymond Remoquillo of NCSI Philippines a subsidiary of Singtel of Singapore discussed how technology will affect the Future of Buildings and Property Management.

The event was also highlighted by the presence of Mr. Hans T. Sy, ARISE International Board Member.  ARISE –  Philippines through Engr. Liza B. Silerio presented its report and encouraged the students to be more engag

ed  in DRR initiatives so as to contribute in the attainment of the Sendai Framework Goals. ARISE member companies like the Philippine Disaster Resilience Foundation (PDRF) represented by its President Mr. Butch Meily gave updates on their disaster response efforts and the various PDRF Resilience Training and Education Curriculum. Ms. Malu Erni, National Resilience Council (NRC)’s Executive Director, on the other hand, shared the NRC’s Resilience Framework with a whole-of-society and multi-stakeholder approach towards disaster resiliency and its recently launched Adopt-a-City Program.  The audience including the students actively participated in the open forum.